Sandra Mendez walked into Dasha’s class after trying to find some way to get fit again.

Sandra was in the military, and spent most of her 20′s out doors and in great shape. It was in her 30′s that she got consumed with work and building her business, the transition left her 25 pounds heavier, not to mention exhausted after long days in the office.

She began to develop back and neck pain, and noticed her stress levels rising almost daily.

“I looked at other routines, but nothing stuck. Spin over developed by quads and made my legs look bigger, plus I like a change of pace and motion in my workouts. I had knee issues after my military training, so it was tough to run again, plus I felt like my body was craving the balance of weights and cardio. My other problem- time. It became harder and harder to get to the gym, my business was booming and I spent long hours in my office.”

“It literally took all of 60 days for the old, yet more improved me to come out! I was feeling better with in two to three weeks, in four weeks I began to clearly see changes in my body. Plus, my knees stopped hurting (I think I finally began to engage my gluts- thank you kettlebell swing). I think I was lucky because I got Dasha’s Body Series towards the end of her test studies, so it was pretty much the exact program the current Body Series is composed of today. Anyway, I lost 25 pounds! I did. Plus I gained muscle and strength, energy and my stress levels clearly went down. There is something about training that makes you feel energized and good. No not good- great!”

It was after her experience that Sandra fell in love with the Kettlebell Kickboxing program. She actually took it one step further and became KBIA certified. Now she gets to train others and help them along their journey, her and her boyfriend are opening up a facility in Kentucky! – Just check her out on our instructors page! 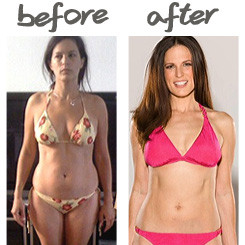